In preparation for Terra Madre Day, we at Slow Food spent a wonderful day, collaborating and creating 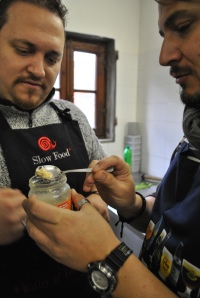 delicious food for saturday’s festa! Not only did we create good food, toast with antique belgium beer “Cantillon” made and aged with raspberries (yes we jumped out of the italian boot) and we decided to jump into a sardenian can

of cheese with… here it goes WORMS! yup u got it, cheese that one time long ago, a worm found its way

that according to these adventurous fellows, was a delicious mistake because it became known asa delicious antique cheese ! here is a description from wikipedia:

Derived from Pecorino, casu marzu goes beyond typical fermentation to a stage most would consider decomposition, brought about by the

digestive action of the larvae of the cheese fly Piophila casei. These larvae are deliberately introduced to the cheese, promoting an advanced level of fermentation and breaking down of the cheese’s fats. The texture of the cheese becomes very soft, with some liquid (called lagrima, from Latin for “tears”) seeping out. The larvae themselves appear as translucent white worms, about 8 millimetres (0.3 in) long.[1] When disturbed, the larvae can launch themselves for distances up to 15 centimetres (6 in). Some people clear the larvae from the cheese before consuming while others do not.”

be in a kitchen where delicious food was being prepared and to have cheese with worms mixed in, i decided to get

squirmy , wormy and try THIS WORM-FILLED CHEESE! (p.s. take a look at what’s squirming on the tongue of this courageous volunteer left photo below!)

well what can i say?  was it good? mm i prefer cheese from parma diciamo but it was simply FUN to slide out of my comfort zone.  i felt 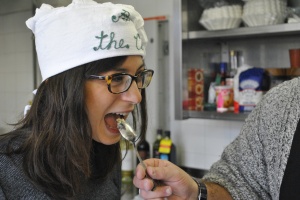 like a curious kid in Roal Dahl’s book’s eating worms for the fun of it! or pippi longstocking to be daring or even a confident tribal woman, getting her good protein from the bugs of the forest.  u know, why not?  stretch and slide out of your comfort zone because… its more FUN!!!!!

PS. worm-cheese is not the only thing being served sat! lol! ragu-lasagne plus lots more!

allow countless people to be inspired and graced by your gifts! 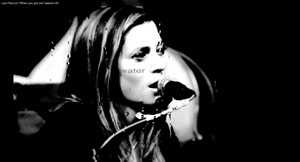 When you feel in your gut what you are and then dynamically pursue it – don’t back down and don’t give up – then you’re going to mystify a lot of folks. ― Bob Dylan